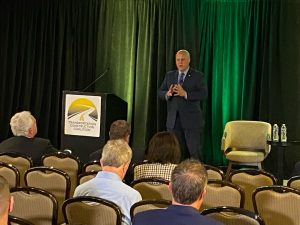 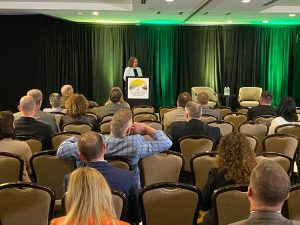 This week, ASA attended the Transportation Construction Coalition (TCC)’s 2022 Legislative Meeting to advance transportation infrastructure legislation on Capitol Hill.  Sen. Fischer (R-NE), a member of the Senate Transportation Committee, and former New Orleans Mayor Landrieu, who has been appointed by the Biden Administration to oversee the implementation of the Infrastructure Investment Jobs Act (IIJA), presented at the meeting.

ASA is a long-standing member of the TCC, a partnership of 33 national associations, who represent hundreds of thousands of individuals with a direct market interest in federal transportation programs.  In 1996, the TCC was initiated focusing on the federal budget and surface transportation program reauthorization debates.  The TCC has membership in every congressional district and provides a vital service to their communities by helping to improve the efficiency and safety of our nation’s transportation infrastructure.

With the enactment of the IIJA on November 15, 2021, the transportation construction industry has the potential to deliver much-needed transportation capital improvements to the American people and economy; however, it’s up to the construction industry to ensure the investment and programmatic changes promised in the IIJA are met and understood by Congress and the Biden Administration.   To this end, ASA, along with the TCC, informed members of Congress and their staff about our positions on the suspension of the federal gasoline tax, implementation of the IIJA, and overall infrastructure funding.

The proposed S.3609/H.R. 6787 the Gas Prices Relief Act of 2022 would seek to suspend the federal gasoline tax with the stated intention of giving financial relief to Americans while prices are steep; however, such a suspension in the gas tax will not guarantee a decrease in the price of gasoline and could make it harder to fund future transportation improvement projects. The federal motor fuels taxes are not directly levied at the pump but collected further upstream from producers and distributors. Thereby, how much of the tax is passed along to consumers varies and is baked into the overall price of gasoline. A variety of factors affect gasoline prices, such as supply and demand, production costs, and taxes. As the federal gasoline tax is just one factor in that formula, it is unclear a meaningful drop in gasoline prices would be seen should it be suspended.  A suspension of the federal gasoline tax would only jeopardize a permanent revenue stream to the Highway Transportation Fund that could make it more difficult to fund projects in the future.  As such, we would oppose S.3609/H.R. 6787, the Gas Prices Relief Act of 2022.

The IIJA is the most significant investment in the nation’s infrastructure networks since the enactment of the Interstate Highway System in the mid-1950s. The IJJA will help stabilize and enhance every state’s long-term transportation improvement efforts. Furthermore, this multi-year plan will facilitate private sector investments in equipment and personnel.  As the Biden Administration moves to implement the law, we recommend the following areas where immediate action should be focused:

Finally, while passage of the IIJA was a significant legislative feat, enactment of the fiscal year 2022 appropriations nearly six months late delayed Americans from beginning to reap the full benefits of these critical investments. Going forward it is critical that Congress fully fund in a timely manner the IIJA programs that are subject to future appropriations. Congress made a five-year commitment to the American people to invest in long-awaited and much needed improvements to infrastructure. Failure to provide timely appropriations for these investments could delay critical construction projects across the country.