The administration and Congress are working to ease shipping industry challenges created by a surge in demand for imported goods resulting from the pandemic.  The largest container ports, Los Angeles and Long Beach, experienced a record flow of ships with 109 waiting to dock in January. While some ports made progress with clearing cargo backlogs in February, staffing and equipment shortages, among other issues, continue to pose obstacles.  The House passed COMPETES Bill includes the Oceans Shipping Reform Act, which would prohibit ocean carriers from unreasonably turning down opportunities for U.S. exports in line with a new Federal Maritime Commission (FMC) rulemaking, prohibit carriers from reducing shippers’ access to containers and equipment, and require carriers to certify that late fees charged to shippers for holding cargo beyond a contracted period complies with FMC regulations.  As reported by Bloomberg News, some carriers chose to send empty containers back to Asia rather than using them for U.S. exports. 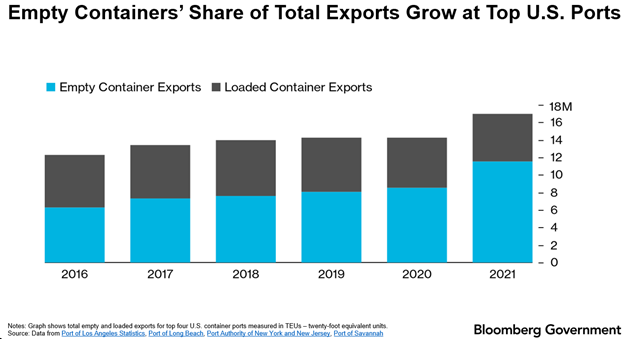